How wildfires are polluting rivers and threatening water supplies 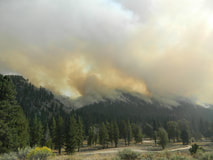 As wildfires become more frequent and destructive in a warming world, they are increasingly leaving in their wake debris and toxic runoff that are polluting rivers and fouling water supplies. Some municipalities are having to upgrade their water treatment methods to counter the new danger.
​
By Ed Struzik, author of Fire Storm
Cameron Falls in Canada’s Waterton Lakes National Park runs cold and clear in summer, when as many as a half-million people come to canoe, fish, hike, and bike in this pristine Rocky Mountain landscape along the Alberta/Montana border. On very rare occasions, it runs a Pepto Bismol pink when heavy rains stir up argillite, a red mudstone that is found upstream. But on June 21, residents, tourists, and park officials were shocked to see the waterfalls suddenly running pitch black. Heavy rain had flushed in soot, ash, and charred tree debris from a fire that burned most of the 195-square-mile park the year before.
​
When it happened again a few weeks later following another violent rainstorm, the dark flow of mountain water rushed in with such ferocity that it piled charred branches and debris into the gorge, a neighboring parking lot, and a street of a community inside the park. The 2017 blaze had been so intense that at one point it danced and swirled 16 miles from one end of the park to the other in less than eight hours. So much of the park had burned that officials initially closed nearly 80 percent of the backcountry trails.

As hotter and dryer conditions spawn an increasing number of wildfires in North America and around the world, one of the overlooked impacts of these worsening conflagrations is on aquatic environments and drinking water supplies. Just as wildfires can have a regenerative effect on woodlands, so, too, can fires provide some benefits to streams and rivers in burned areas. But scientists are warning that intense and repeated fires can damage the ecology of waterways by exposing them to the sun’s heat, exacerbating flooding and erosion along denuded hillsides, and releasing toxins such as mercury that are often liberated from soil and tree trunks.

The effect of major wildfires on drinking water supplies can also be severe, as evidenced by fires that burned upstream of places such as Fort McMurray in Canada in 2016; Denver and Fort Collins, Colorado in 2002 and 2012; and Canberra, Australia in 2003. Water treatment plants in those places were overwhelmed by sedimentation, dissolved organic carbon, and chemicals that were released by fire.

With fires burning bigger, hotter, and more frequently, the threats to water supplies and aquatic systems are bound to escalate, according to Deborah Martin, a Colorado-based U.S. Geological Survey (USGS) scientist. She points out that an increasing number of regional, national, and global water assessments are now including wildfire in evaluating the risks to drinking water.

“Forests yield 40 percent of the water for the world’s 100 largest cities,” she says. “Many of these cities are already water-stressed because of drought, climate change, and increasing water consumption. The increase in wildfire activity could make it much worse.”

Barb Johnston, a Parks Canada ecologist, is confident that the spruce, pine, and aspen in Waterton Lakes park will recover as they typically do after a wildfire. What concerns her and some local residents more is the possibility that this fire, like several other recent wildfires in the United States and Canada, will have a deleterious impact on fish and drinking water.

So far, the impact on ground and surface water that local ranchers, residents, and backcountry visitors use appears to be minimal. But Parks Canada has called in University of Alberta forest hydrologist Uldis Silins — an expert on the impact of forest fires on freshwater ecosystems — to set up water monitoring stations throughout the park.

Late last month, Silins and a research associate, Chris Williams, visited the park, where they discovered black mounds of mud alongside channels of Cameron Creek. The mud was rich in nitrogen and phosphorous that accumulated after the fire, driving the growth of green algae in the creek.

“You don’t normally see algae growing in these nutrient-poor mountain streams, especially at this time of year when it can snow,” says Silins. “But that’s what an intense fire often does.”

The relationship between wildfire and watersheds is complex, with each affecting the other in ways that were largely overlooked until the mid-1990s, when intense fires began burning the mountain forests in Colorado. More than 30 major wildfires have burned in the state since then.

Among the most notable was the Hayman Fire, which burned 138,000 acres across four counties in 2002, forcing the closure of some federal and state parks at the height of the tourist season. The intense fires removed many of the trees from parts of the mountain landscape. In the hot drought conditions that followed, the soils in those denuded landscapes baked. Some spring-fed streams stopped flowing. Chemical compounds that were vaporized by the fire got driven into the soil. As they condensed, they formed an impervious layer just below the surface.

Without trees, vegetation, and a stable soil structure to absorb the heavy rains that followed, tons of ash, debris, heavy metals, and nutrients were flushed through the watershed. This resulted in the precipitous decline of the blue-ribbon South Platte River trout fishery. Worst of all was that the affected watershed provides drinking water to 75 percent of the state’s residents. Hundreds of tons of sediment filled lakes and reservoirs. Intakes became clogged. Water quality suffered not just for a few days, but for several years.

To address the problem, more than 60 scientists from various disciplines were brought in. Crews dredged tens of thousands of tons of sediment. More than 175,000 trees were planted. Still, the water quality problems persist and the South Platte fishery has not fully recovered.

Since then, other cities, states, and provinces have undergone similar challenges.

The Australian city of Canberra suffered terribly in 2003 when fires blackened the landscape along the Cotter watershed, which provides 96 percent of the water for the 350,000 people who live in Canberra and nearby Queanbeyan. Heavy rains that followed caused massive erosion and flooding. More than 2,800 tons of sediment and an array of metals such as iron and manganese were dumped into the watershed. The quality of water was so poor that the city of Canberra was forced to build a new water treatment plant.

Fort Collins, Colorado was hit almost as hard in 2012 when the tainted runoff from badly burned areas overwhelmed its water treatment plant. Residents there were fortunate because the city was able to draw from a nearby lake that had not been affected by the fire.

In the Alberta tar sands town of Fort McMurray, which was nearly destroyed by fire in 2016, Silins and his colleague, Monica Emelko, a University of Waterloo environmental engineer, have been helping the city cope with the high amounts of dissolved organic carbon and sediment that continue to challenge the municipal water treatment plant.

The biggest issue, according to Emelko, is the dissolved organic carbon that is released by wildfires. When mixed with the chlorine that is used to treat water, it can produce carcinogens that most treatment plant technicians don’t have the expertise to manage. To deal with the challenges, Fort McMurray is now spending more than twice as much on chemicals as it did before the fire burned along the Athabasca River. Other municipalities that purify water supplies with chlorine could face a similar threat in the wake of severe forest fires, scientists say.

Wildfires are not always bad for watersheds, according to John Moody, a USGS scientist who began examining the relationship between fire and water in 1996 when the Buffalo Creek fire burned 11,600 acres of forest southwest of Denver. The erosion that often follows, he points out, replenishes the course grain sediments that are critical to fish habitat. The fires also flush in nutrients that are beneficial to fish. In the years since a major forest fire in 2003 in the Castle Crown Wilderness, west of Waterton Lakes park, the fish in burned areas have grown larger than fish in unburned areas, mainly because large amounts of nutrients released by the fire have flowed into rivers and creeks.

Fish, however, are vulnerable to the chemicals that are often liberated by fire. Scientist Erin Kelly discovered this in the summer of 2000 when a wildfire in Jasper National Park coincided with a study she was conducting on mercury concentrations in alpine lakes. Following the fire, the doubling of the lake’s nitrogen concentration and a quadrupling of the phosphorus concentration was not a big surprise. What was not expected was a five-fold increase of mercury in fish.

Fire liberated the mercury from the soil and trees in the forest, and changes in the food web moved the mercury quickly up the food chain. In this case, invertebrates feasted on the nutrients and mercury that the fire introduced. Rainbow trout and lake herring capitalized on that bounty of invertebrates, and passed on the mercury to lake trout that prey on them. At the top of this food chain, the concentrations were high enough for government officials to issue a health warning for fish consumption by humans.
​
Silins is not alone among his peers in expecting that the situation will get worse as forest fires intensify in a warming world. The demand for his expertise is now higher than ever, with calls coming from as far away as Tennessee, where fire burned in the Great Smoky Mountains in 2016, and from British Columbia, which has undergone a record number of burns in recent years.

“Nowadays,” he says, “we can’t keep up with the requests we’ve been getting for advice and help. I don’t see it slowing down. The impact that wildfire has on watersheds is a challenge that is going to get a lot more intense.”

John Moody says there are two things to watch for in the future: the intensity and frequency of forest fires, and the extreme precipitation – those that unleash a lot of rain in 30 minutes – that follow a fire weeks and months after it is extinguished, when soils may not be able to absorb as much moisture as they normally do. Those are the events that can cause severe flooding, extreme sedimentation, and the liberation of undesirable chemicals.

Fernando Rosario-Ortiz — an associate professor of environmental engineering at the University of Colorado, Boulder and the lead author of a recent report on the impact of wildfires on watersheds and water supplies — warns that at some point in the future, 100 percent of the communities that draw their water from forested watersheds are going to face the challenge of dealing with water that has been degraded by fire.
​
“It’s not a matter of if, but when, a fire is going to degrade that water,” he says. “Wildfires have been burning more intensely and more often. Downstream communities and utilities need to start planning for worst-case scenarios… This is an emerging challenge that is not going to go away.”